Solving combinatorial scheduling problems can be done using mixed-integer linear programming (MIP) or some heuristic approaches such as the Tabu search.

There are several ways to formulate the scheduling problem. The flow formulation presented by Christian Artigues in 2003 is one interesting approach. Assume for simplicity a process with two tasks:

The nodes 1 and 2 are representing the tasks. “S” is the start task and no edges can go back here. “E” is the end task and only incoming edges are allowed. The directed graph shows all possible edges for this configuration per resource type.

The graphs tell us how resources can be transported between different tasks. Hence, “S” can give resources to task 1 and task 2 while also sending resources which are not needed directly to “E.”

Assume that we have the following resources available in “S” to start with:

Task 1 requires the following to be able to produce one product A.

Task 2 requires the following to produce one product B.

This problem can easily be solved by hand yielding:

The solution is an acyclic directed graph where resources flow from “S” to “E” fulfilling the constraints given by each node. Based on the solution task 2 must wait for task 1 to finish. Also, note that the edge between 2 and 1 has been removed since it is not needed.

Solving more complex resource constrained scheduling problems increases the available number of combinations rapidly making the problem harder and harder to solve as can be seen for the full graphs for 3, 6 and 10 tasks: 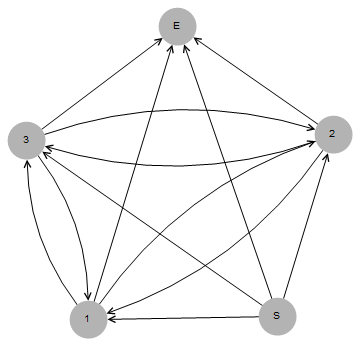 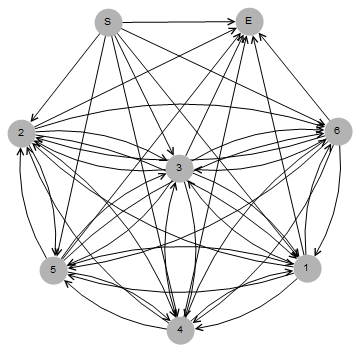 In some cases, it is possible to change the order between tasks or even execute them in parallel without violating any constraints. The graph tells us whether any task must follow any other task(s), either directly or through a chain of events. What is left is to take the duration of each task into consideration to produce the final time schedule.

The resource-constrained scheduling problem is relatively simple to solve if there is either excess of tasks or resources compared to the other. The number of combinations is much reduced then. When the distribution of resources is close to the number of tasks involved the problem gets much harder to solve.

Playing around with the measure of optimality can yield many different results depending on the formulation. For example, some tasks could be prioritized to be executed before others and tasks could be distributed over a time interval to maximize robustness for deviations and so forth.

The problem can be solved using mixed-integer linear programming (MIP) for which there are several mature solvers available on the market.

View all posts by

This site uses Akismet to reduce spam. Learn how your comment data is processed.